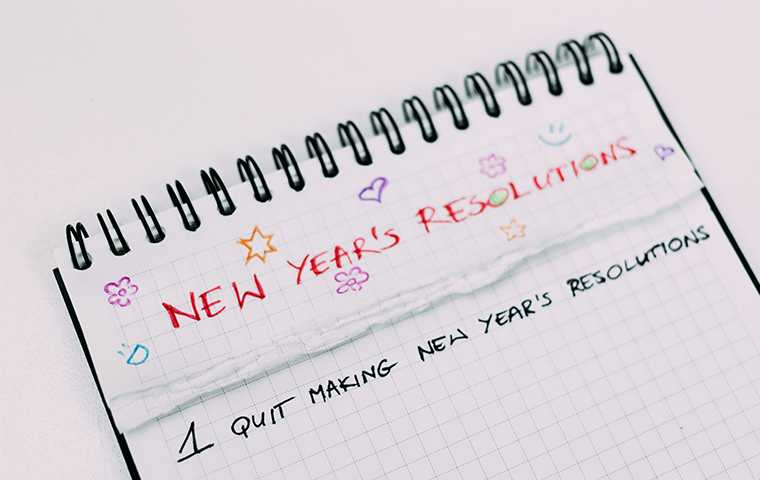 Tips to Renew your Resolution Resolve

The hustle of the holidays is over, and the shiny new sheen of the new year is fading. It's February. How are those New Year's resolutions holding up?

Self-discipline and willpower appear to be the biggest determinants of change. Often change is behavioural and changing habits and behaviours is often accompanied by some level of emotional or psychological discomfort. The ability to push through that period of transition, and all the discomfort that goes with it, leads to success.

This may be why so many resolutions start to slip come February. It is when most people are in the thick of trying to make a transition and willpower starts to falter. If this sounds familiar, we've got five tips and suggestions from the research to help get you through to the other side.

Tip One - The Power of One: having too many resolutions can quickly lead to fatigue. Researcher Richard Wiseman found the chances of individual success was greater when people channeled their energy into changing just one aspect of their behaviour. If you were overly ambitious to start, now might be a good time to decide on which resolution is most important to you and focus your energy there.

Tip Two - Be Specific: vague plans fail. For example, instead of committing to go for a run twice a week, schedule those runs on Tuesdays and Thursdays at 6pm. Keep these in your calendar as you would any other appointment—there may be temptation to move or cancel, but stick to the commitment you've made to yourself. The only person you'll disappoint is you!

Tip Three - Build Self-Trust: to cultivate a capacity for self-trust, you must succeed. By consistently making small specific things happen successfully, you affirm to yourself that you walk your internal talk. Don't challenge yourself with a pledge you're not sure you can handle. For example, if you're doubtful you'll stick with going to the gym five times a week, then don't promise yourself you will. Make a commitment you know you can reasonably keep.

Tip Four - Make it Personal: don't go with the usual crowd favourites for resolutions, unless it truly is your goal. Think about what it is you really want and why it matters to you. Even if your goal is to get to the gym and/or lose weight, add some personal details (see above).

Tip Five - Be Persistent: new habits take time to learn. You will slip up occasionally. You might give into temptation or miss the gym for a few days, but don't use that slip as an excuse to throw in the towel. Mistakes are part of the process. Use the experience to your advantage by learning from it and arming yourself for success the next time a similar situation arises.

We hope these tips help you live better, no matter how you aim to improve your life!

Over the past year, we have all really made use of our home environments. After spending an increased amount of time within our...

Fire Safety & Your Pet    Emergencies, though scary to think about, can happen. With anything, proactiveness and...

As we lead up to National Indigenous Peoples Day celebrations on June 21, we would be remiss if we did not first acknowledge the...

What is tenant's insurance?  In short, it is the best way to ensure your personal property and belongings are protected. To...