Residents Give Thanks by Giving Back to Community.

"Kelson Group is committed to community support and when I received a flyer from the Hope Mission in the mail stating Thanksgiving dinner could be provided for $2.70 per person, I made up flyers and posted them to all of our residents in Edmonton," said Val Letkeman, Heathridge Estates community manager.

"I have personally helped with other projects at the Hope Mission and continue to be impressed by the work they do for the Edmonton community," said Letkeman.

"We served 560 meals at Thanksgiving," said Halsey. "So that donation extended into the week beyond Thanksgiving as well."

"There was a gentleman who came in while I was standing by the front door," said Halsey, "I thought he was upset, so I welcomed to come in and tried to make him comfortable. Then he said, 'it's just so beautiful'. The atmosphere in there with all of the place settings and food and people had touched his heart."

Halsey said "the Hope Mission is a part of the community and the word in the greater sense means we're all supporting each other. "

"So, when Kelson Group donates or volunteers, they're supporting the great community we all belong to. The relationship between Hope Mission and groups and donors is crucial because we can't do it without them."

Letkeman said she hopes to make the donation an annual commitment.

"It was a great opportunity for our residents and our Kelson team to show Thanks and Giving!" 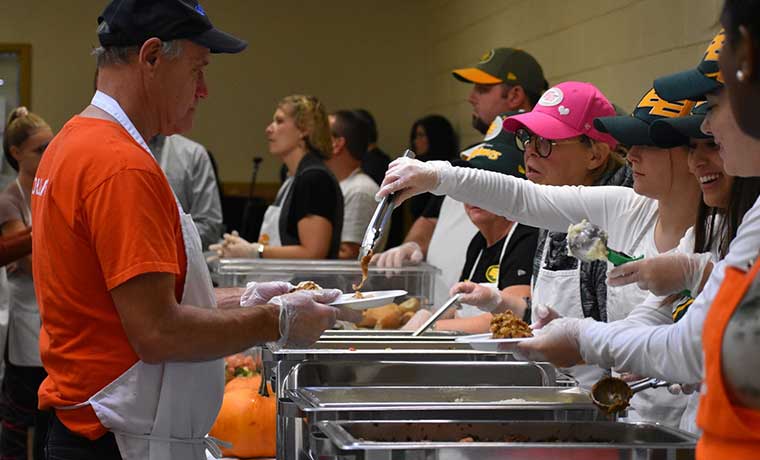 Residents Give Thanks by Giving Back to Community.

This year, the residents of Heatheridge Estates and Kelson Group staff gave thanks by giving back to the Hope...