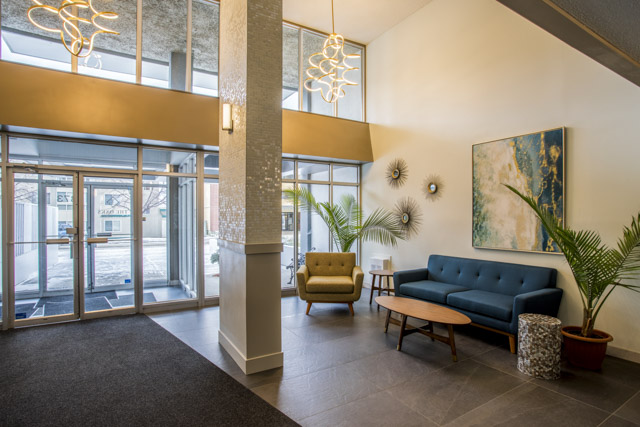 Breakfast at Tiffany’s Inspires Lobby Design at The Oaks

"I don't think I've ever drunk champagne before breakfast before. With breakfast on several occasions, but never before."   - Breakfast at Tiffany's

The iconic movie, Breakfast at Tiffany's, first wowed viewers back in 1961 with its flare and style. Who can forget the signature grace of Audrey Hepburn in the romantic comedy which is now almost 60 years old! The movie has inspired both the movie and fashion industries for decades, and its Mid-Century Glamour styling served as the inspiration for the 2-storey lobby renovation at The Oaks apartments in downtown Kamloops.

The Oaks is a stately high rise on Nicola Street and has been a landmark in the downtown core of Kamloops for decades.  With its large windows, wrought iron railing, stately central column and a second storey mezzanine, it speaks of glamourous apartment living in the 1960s.

Kelson Group Design Lead, Pam Fawcett, wanted to add modern charisma to the space while maintaining its mid-century vibe.   Because the apartment building caters to a diverse demographic of people, including a large number of seniors who use the lobby area while waiting for a taxi or a family member to pick them up, the area needed to be bright and spacious while still feeling welcoming.

First, Pam and the KG Crew removed the dated furnishings and busy floral carpet.  Sadly, the next to go was the beautiful but not–to-code scrolled work railings at the mezzanine level.   The gallery walls were painted a simple off-white to emphasize the height of the space and allow the eye to drift upward to the stunning scrolled gold ribbon light fixtures. The walls of the elevators were painted an eye-catching Tiffany-esque blue and the column tiled in a luminescent mosaic, each of which enhanced the charm of the space.  Large scale art was added along with mid-century furnishings to accommodate a busy lobby with people coming and going who often have a need for seating.  Beautifully simple stained wood pieces complement the new wood and iron railing at the mezzanine level.

Along the way, Pam reached out to tenants to understand what they wanted to see done for the renovation, knowing The Oaks is their home and the lobby is the first impression friends and family have of their place. It was essential to ensure the space was functional yet fashionable. Great care was put into the large tile flooring with a stately black slate look that is stylish and can withstand high traffic.   At the request of our residents, a large-scale clock holds a place of prominence as well.

"This scale of a renovation to suit the needs of such a diverse group of people is always a challenge," said Pam. "Many times, people will be watching the changes happen and if they don't understand the vision, it doesn't quite look right. I always remind people to trust the process and be patient, and then before you know it, it all starts to come together before your eyes!"

Breakfast at Tiffany’s Inspires Lobby Design at The Oaks

"I don't think I've ever drunk champagne before breakfast before. With breakfast on several occasions, but never...