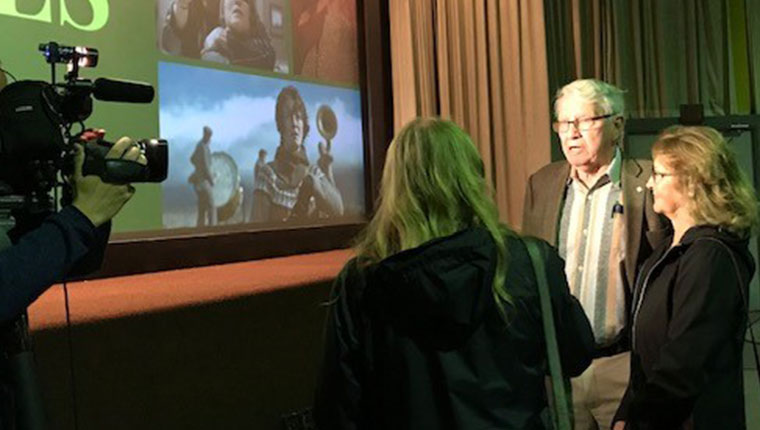 Kamloops, B.C.: the Kamloops Film Society (KFS) is excited to announce that they are taking over operations of the Paramount Theatre effective May 1, 2019, an opportunity made possible with the collaboration of Kelson Group, a local property management/development company that purchased the theatre property. For KFS, it's a renewed time of celebration and presents an exciting challenge for the future.

"This is a new era in the 45-year history of the Society and an exciting challenge," said Tom Friedman, KFS Chair. "The successes of our Thursday Film Series and our annual Film Festival have shown us there's strong community support for what our Society does, and this gives us confidence as we take on the operations of the Paramount."

The collaboration is a remarkable opportunity for the Society who have signed a lease agreement with Kelson Group and will pay below market rent plus the operating costs. Ron and Rae Fawcett will also be making a personal donation to assist with these operating costs. The lease is for five years with an option to buy at the original purchase price at any time in those five years, plus an option to extend the agreement by an additional five years.

"Kelson Group has gone out of their way to give KFS every opportunity to make the Paramount Theatre a thriving cultural amenity in the downtown core," said Friedman. "Our Society is so thankful for their incredible generosity and together we share the commitment of Ron Fawcett and the Kelson Group to ensure Kamloops is a culturally vibrant city. We are so appreciative for this opportunity to continue expanding our vision and mission."

Kamloops is important to Kelson Group and its President Ron Fawcett who loves to see Kamloops thrive through the work of the community and groups like the Kamloops Film Society.

"We are proud to be a part of the community of Kamloops," said Ron Fawcett. "We know a community thrives when opportunities exist for residents to engage and experience heritage, culture, arts, sports, and more. The opportunity for our company to purchase the theatre in downtown Kamloops and then to work in collaboration with KFS is unique. We look forward to providing our support as the Society builds out its business plan to run the theatre and make it a first-class experience. We encourage the community to show their support by sponsoring the Society and attending the films they'll be bringing to our city."

KCBIA Executive Director Carl DeSantis is also excited about the opportunity and what it means for Downtown Kamloops. "This is another remarkable example in which Kelson Group has clearly reinforced their commitment to our Downtown community, and, to Kamloops. As we look ahead, this collaboration enables the Kamloops Film Society to sustain the future of the building as a destination while supporting film, arts, and other forms of entertainment."

Moving forward, KFS is committed to its annual 10-Day Kamloops Film Festival in addition to its popular Film Series. The Society plans to diversify the theatre venues, concession offerings, and will be engaging with the community to support and develop a cultural hub where film, music, comedy, theatre, and other arts forms are presented and celebrated. The Paramount Theatre will close for a few weeks and re-open part time June 1 as KFS builds out and implements an operations plans for the venue and will aim for a grand opening in the Fall of 2019.

Taking on the full-time role of Executive Director of the Society will be Dušan Magdolen. Dušan is well known for his work with Western Canada Theatre, Project X Theatre, and as Chair of the Kamloops Film Festival. The Society knows he is up for this new and challenging role and brings a wealth of experience to ensure its success. Dušan, too, is excited for this new opportunity.

"I am humbled, excited and frankly a little scared to be given this honour and responsibility by the Kamloops Film Society," said Magdolen. "Film, and the arts in general, means a lot to me and has always been a huge part of my life. I look forward to elevating our Society and the theatre to new heights as a cultural hub. We know it won't happen overnight, but we intend to honour the community's aspirations for what this venue can be and are off to a great start with the incredible help of Ron Fawcett and Kelson Group."

ABOUT THE KAMLOOPS FILM SOCIETY

The forerunners of the Kamloops Film Society -the Thompson Valley Film Society, the Cariboo College Film Society, and the Cariboo Film Society-screened 16mm. films, first, at the Cariboo College campus cafeteria, then at the South-Central Health Unit auditorium in 1973. In the late 1980s, films were screened at the newly constructed University College of the Cariboo Clock Tower building's Alumni Theatre. By that time, 35mm films were the new standard and the Society needed to rent a theatre with the appropriate projection equipment; it began screening 35mm films Sunday afternoons at the 404-seat North Hills Theatre. After several years at North Hills, Society members expressed a preference for a downtown location. The Society moved its showings to the old Odeon Cineplex Theatre on Victoria at 6th Ave from 1999 to 2001 and initiated Thursday night screenings at 7:30 pm. When that theatre closed, the Paramount theatre offered the Society Thursday night screening times at 7 pm, and fully accommodated the annual March Kamloops Film Festival, and that theatre has been the home of the Society ever since.

At present day, the Kamloops Film Society runs three main events: the Thursday Night Film Series, the annual Kamloops Film Festival, and the annual Kamloops Independent Short Short Festival.  The Society's mission is to bring the best in independent, Canadian and foreign cinema to Kamloops and endeavours to promote and support filmmaking and related visual media in the Kamloops area through grants. The Society's vision is: community and individual transformation through film. The Society is governed by a Constitution and By-laws. The seven-member Board of Directors meets bi-monthly and the Society holds its Annual General Meeting in November each year. For more information: www.kamloopsfilm.ca

Kamloops, B.C.: the Kamloops Film Society (KFS) is excited to announce that they are taking over operations of the Paramount...