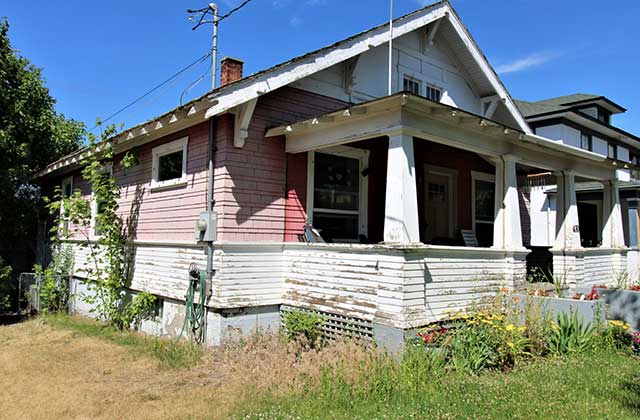 House at 430 Nicola Street in Kamloops Bound for McLure

Kamloops, B.C.: in late summer of 2021, Kelson Group announced a collaboration with Nickel Bros. to help them determine which of the 20 houses in the downtown core of Kamloops might be suitable for relocation to make way for the new City Gardens development. Of the 20 houses to be removed, 12 were identified for potential relocation and the house which currently sits at 430 Nicola Street will be “picked up” in a few short days and moved approximately 45 kilometres north to the picturesque community of McLure.

“We are very excited to see the process get underway,” said Kelly Fawcett, Vice President of Kelson Group. “It’s exciting for our company that the right owner with the right location has come forward and decided to relocate a house. As the team from Nickel Bros. tells us, these old houses require a lot of work to move and an equal desire of the homeowner to invest time, money, and effort into restoration efforts.”

Although initially there was a lot of interest from the community to relocate one of the 12 houses, the team at Nickel Bros. was upfront with people on the condition of the houses and the anticipated work that lay ahead. With transportation of the houses only viable within a 100-kilometer radius, this also limited the potential for would-be owners beyond the relocation zone. A few others are still in talks with Nickel Bros. on relocating a house from the downtown houses available.

“We want to communicate our gratitude and respect to Kelson Group for their position on saving homes from demolition and ultimately from the landfill,” said Tim Nickel, General Manager at Nickel Bros. “Additionally, we are appreciative for the cooperation of the City of Kamloops and the local utilities in making this first house move happen. The model exampled by Kelson Group, and all involved, shows a strong commitment to the environment while preserving a piece of the past. Our Nickel Bros. Team is excited to be a support in this process.”

The house at 430 Nicola Street has three bedrooms, one bathroom, and is a total of 1,200 square feet. The Nickel Bros. crew arrives in Kamloops the afternoon of December 3 to start their work Saturday to lift the house for transport, moving the house sometime between 11pm on Sunday, December 5, and the early morning of Monday, December 6. Although Nickel knows there will be a lot of community interest to watch the process, he cautions people that this is an active work site with large equipment and asks people to remain back and obey their work crews.

One of the interested community members watching the process may be Andrew Yarmie, retired Thompson Rivers University history professor and former chair of the Kamloops Heritage Commission, who has been engaged by Kelson Group to document some of the old houses.

“Moving the house at 430 Nicola Street is an important first step for this neighbourhood as it provides an example of what can be done with the other homes in the 400 blocks of Nicola and Battle Street. This house was built in 1925 in the popular Craftsman style but what is important about it are the families who inhabited it. This neighbourhood attracted upwardly mobile workmen and small business owners and, from 1927 to the 1950s, two families of CNR engineers made their homes here. In 1958, the well known Shoyama family who owned Kamloops Bakery on Victoria Street bought it and Masto, the friendliest baker in town who everyone called "Slim," inherited the house in 1985 and it remained in the family’s possession until he died in 2005.  Moving the house will keep these memories alive.”

For those interested in relocating a house, the deadline to finalize the process is quickly approaching and all inquiries can be made directly to Nickel Bros. at enquiries@nickelbros.com

House at 430 Nicola Street in Kamloops Bound for McLure

Kamloops, B.C.: in late summer of 2021, Kelson Group announced a collaboration with Nickel Bros. to help them determine which of...